2014 Chinese Animal Zodiacs for Year of the Horse 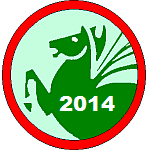 2014 is the Year of the Horse. 2014 Chinese New Year Day is on January 31, 2014. Chinese Astrology uses the cycle of 60 Stem-Branch calendar system to build the Chinese astrology birth chart. 2014 is the 31st Stem-Branch in the calendar cycle. That is Green Wooden Horse Year.

Chinese like Horses for many reasons. Horse provides a good and quick transportation for people before automobiles. Horse can give people a ride to their destination. Therefore, horse is not only a symbol of traveling, but also a sign of speedy success.

Horses like to compete with others. They pursuit for their freedom, passion and leadership. Therefore, people will have busy schedule for their goal in the year of Horse. In Chinese Five Element Astrology, Horse is connected to fire, red and heat. Also, horse is a social animal and red is also connected to love, therefore. horse is treated as a Romantic Star in Chinese Astrology.

Horse is intelligent animal. Horses need to be trained to become useful to human. Human can make Horse famous. Without human's guide, Horse just a wild animal. It doesn't know where to go. There is no destination in its life.

In Chinese Five Element theory, Horse is in the Fire group. Horse month is in the middle of summer. Horse is the strongest Fire animal in 12 zodiacs. 2014 is year of Wooden Horse. Wood can help Fire to burn. So Fire can last longer. When Horse meets Tiger and Dog, then they will form even stronger Fire. Too much Fire implies the hot temper and no patient. If the element of Fire is favorable to the person, then the person should have a good fortune in 2014. If Fire is unfavorable to the person, then 2014 will bring big trouble to the person. More information about Chinese Five Element astrology page is at 2014 Chinese Astrology - The Year of Green Horse.

The first day of the Chinese astrological year is the first day of the Tiger Month (Start of Spring). The Tiger Month begins around February 4, each year. If you were born before February 4, then you should check Your Chinese Zodiac Sign first before reading your 2013 Chinese zodiac. The simplest way to prove Chinese zodiac signs not determined by Chinese New Year days is to see your Chinese Astrology Birth Chart using your birthday and birth time.

Besides using astrology animal signs and basic fighting and attraction relationships, Chinese zodiac also uses Chinese astrology constellations, which refers to the way ancient Chinese grouped the stars in the sky to predict the coming fortune. More than 100 stars are used in the Chinese zodiac. There are about 60 commonly used ones. Each star has a different characteristic. Basically, they can be divided into Lucky Stars and Unlucky Stars, which are the major factors to predict people good or bad luck in the coming year.

Click on your Chinese zodiac sign or birth year below to peek your fortune of Career, Money Love and Health in 2014, the year of Horse.

Since the prediction of Chinese Zodiac is based on Chinese constellations, which are different from modern constellations, many positions of stars today have moved far away from Chinese ancient time's positions. That means some predictions on some stars are losing accuracy. Around

Tang Dynasty (618 A.D.), Chinese astrology moved the center point of the sky to the Sun to develop new prediction system without using any distant stars. Since that time, the Chinese astrology prediction began to use the zodiac sign of people's Birth DAY to represent the person. (Chinese use same Chinese character